Indonesia ia so big! I found it hard to decide how to spend my time and how to devide it between Java and Bali. My fantasy would run wild when thinking of Bali: lush green ricefields, yogis and yoginis, healthy raw food, spirituality,…

But Java is so big and beautiful. Even in and around Bogor, where I have only spent one night before the meditation course, there was so much to see and to experience. My host Tom wanted to be my guide to show me all of these wonderful places.

I did not know what to do. So I just listened to my heart and my heart was calling for Bali. But, I had read about this one bruising city in Java, named Yogyakarta. Like my hometown, Leuven, this is also a big student city.

To get there, I first needed to go to Jakarta. From Jakarta I could choose: a 10h train ride or a 45min very cheap flight. If I would have had more time, I would have taken the train. It must be interesting to see how the landscape changes.

To go to Jakarta, I had company from Catherine, whom I’ve met during the meditation course. She was on her way to Australia. We took the train together from Bogor to Jakarta and hung out for the rest of the day. Catherine had a suggestion for a hostel and we checked-in for the night. They had these pods or cubicles in the dorm. Some people might feel a little claustrophobic inside, because there is only one opening, at feetside. I liked it. It gave you good privacy, even tough you were in a dorm with a lot of people. The hostel is Teduh Hostel, very close to the Jakarta Kota trainstation. If you need to be in good connection with the airport, I suggest you stay around the Gambir train station instead. A good hostel there is Six Degrees.

We went out for dinner and stumbled upon a nightmarket around a square. It was nice to walk around, but I wouldn’t do it if I was alone. Jakarta is not a very nice place to be or to walk around. If you are in transit for a flight it’s ok to spend a night here, but otherwise…not sure if it’s worth. I haven’t met any person who spoke positive about the city or who liked it. It’s a pitty, but maybe we just don’t know where to go. Sometimes you need insider knowledge to find the nice places. Next time I’ll couchsurf if I have to be in the city again.

The next day I started my adventure to arrive at the airport on low budget. This meant walking with all the luggage for almost 30 mins in a not so nice neighbourhood. But I got there and it is manageable! From Jakarta Kota you can take the train to station Juanda.

When you come out of the trainstation take the stairs to go on the bridge to cross the street (slightly to your right,but ahead). You need to cross the busy street. When you descend again on the other side, turn right and take the immediate street on your right (the street goes along the railway bridge).

At the end of that street you can ask the people around you, they like to help you out. The Damri bus station is ahead, but it’s a busy intersection so you have to walk around the junction to get there. Keep left when coming out of the street, cross the street at the first pedestrian crossing, walk to the right and follow the street as it turns left. Ahead you see a pedestrian bridge over the busy road. Take it to cross the street and the bus station is just behind the exit of the bridge when you walk down. The Damri bus to the airport costs 40.000 rupiah and the train from Kota to Juanda costs not more than 4000 rupiah. The Damri bus takes you to the airport in 40min to 1 hour, depending on the trafic and the craziness of the driver.

A few hours later I landed in Yogyakarta. I was staying at Bhumi Hostel, just outside the city center. This hostel had amazing reviews, so I had to check it out! It was very easy to reach. I took local bus nr 3B and got off at busstop Lapangan Karang (in front of the football field). When you get off the bus, walk to the right and at the corner of the football field turn left. A few meters further on your right you’ll find this lovely hostel. The guys working at the hostel – Jack & Wildan – are amazing! They will go one step further to make your stay unforgetable. I read this in the reviews and that was the reason I had booked it. It turns out it is the plain truth!

When I arrived I noticed something strange… I was trying to book my last flight that I would need for the entire trip, but the payment would not get through and I did not know why. Soon it became clear that the credit card had reached its limit. I had booked 5 flights the past week, not keeping track of these expenses. So, now I was in trouble! I had almost run out of cash money and I could not withdraw any. What to do in Yogya on very low budget and how to make sure I have money when arriving in Bali a few days later??! I knew the taxi in Bali from the airport to Ubud would be expensive, so I was worrying a little bit. I had to be creative!

Luckily the due date of the card, when the balance comes back to zero would be on the day I would arrive in Bali so I knew everything would work out eventually. But for the remainig days in Yogya I felt “stuck”.

Suddenly I remembered I still had some euros as a backup for when things would go wrong. Not much, just 35€ but I could sleep and eat and even do 1 excursion in Yogya. But before being able to exchange this, Jack had borrowed me some rupiah so I was able to go on the temple tour to Borobudur and Prambanan. I am so grateful for this!

On the tour I met Lianne and Yannick, both Dutch. Yannick was a guest in the same hostel as me and he did the nicest thing for me to get me out of trouble! He withdrew money for me with his card, which I could transfer him back via online banking. I have been so lucky on this island, I cannot thank people enough!

Both temples were amazing! It was worth getting up at 2.30am to see the sunrise, so I definitely recommend this. When you do, just make sure your means of transportation has AC. Ours didn’t so we almost suffocated around noon. It was so hot, at one point there was steam coming out of the car’s engine. Overheated. Oh just regular things around here… 😊

A funny thing: everywhere where me, Lianne and Yannick would go, we were the main attraction for the local people. I guess they don’t get to see that many tourists. On every corner people (mainly kids) were asking us to take a picture with them.

That evening I went to check out Malioboro Street, the touristic area… I did not like it very much. The only thing you could see was shops, shops, shops and art expositions. That I liked! I went to check one out, because a man on the street invited me to. The art teacher exolained how the local batik paintings are made. It is a time consuming form of art, but with very beautiful results. I almost bought a painting. (The paintings are made on cotton or silk sheets so they’re foldable) Unfortunately my regular debit card was unusable in Asia – I’m not explaining why because I don’t want to talk bad – so the transaction could not go through. On one hand tok bad, but on the other hand very fortunately because the guy was apparently charging me way too much, I found out later!

If I had enough cash I would have taken a batik art class myself. I knkw what to do next time! An Indonesian cooking class was also on my to do list. One thing I love is: tempe. It’s a meat substitute, like tofu. It’s also made from soy beans, but they go through a fermentation process and it results in something very delicious and healthy! The health benefit might get lost when buying it on the street, since they deepfry it. I hope I can try to make this when I get home!

My last day in Yogya I had mainly spent in the hostel, to save money. In the morning I did yoga and Jack joined me. I like ‘teaching’. I learned him do Surya Namaskar aka a version of the sun salutation (there are 3 of them in Ashtanga Yoga: A, B and C).

In the afternoon, Wildan, the other hostel staffmember took me to his gym for a yoga class. If teachers use the Sanskrit names of the most commonly used poses, I can totally follow. But when it’s only in Indonesian, well…then I’m lost. After the class I had a little bit of a sore neck from always looking up at the teacher and the rest of the students to see what they’re doing. But the practice was not lost, my body felt good after the workout! Thank you Wildan!

So 1 advice if you go to Yogya: stay at Bhumi hostel! These guys are great! The place is clean, you get good local breakfast and the busstop to go to the city center or the airport is very nearby!

Next: Bali – the last part of my own Eat Pray Love adventure?? 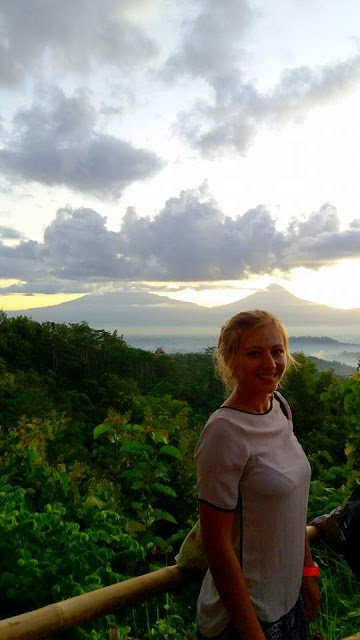 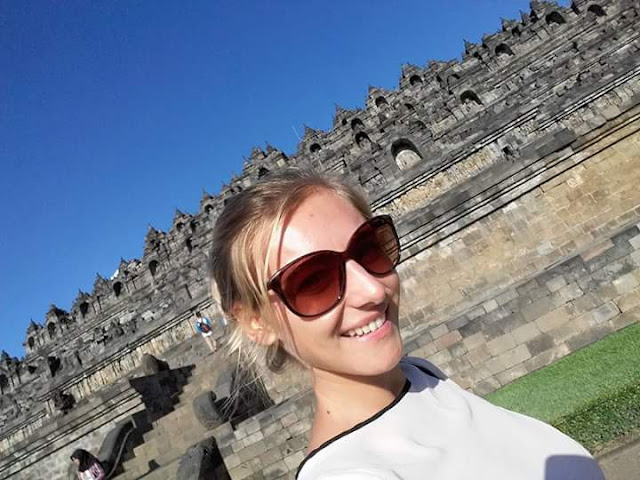 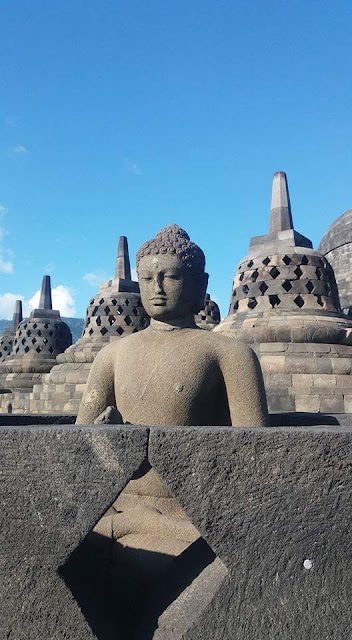 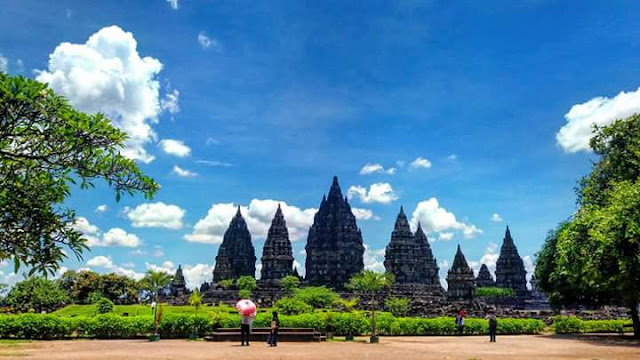 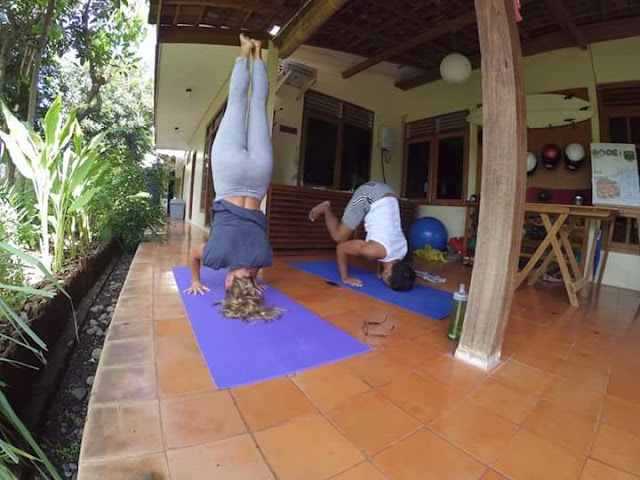